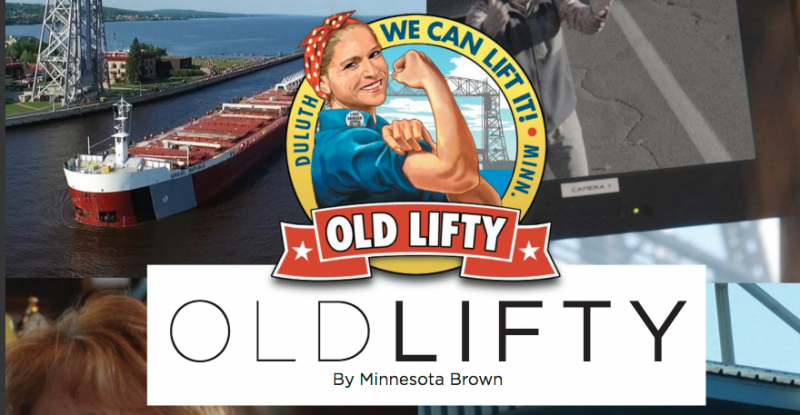 Some say we're in the golden age of television, a time when the breakdown of the big networks' monopoly on production creates new opportunities for smaller, independent artists with good ideas.

That's certainly the white-capped Lake Superior wave that producers of a new web series based in Duluth hope to catch.

"Old Lifty" is based on a woman who returns home to Duluth from Washington, D.C., after an untimely job loss. Once a mover-and-shaker, she becomes an operator on the Aerial Lift Bridge in Canal Park. She's surrounded by wacky local characters and the situational comedy that gave us the genre's name: sitcom.

Directed by Miles Hanon and produced by Tom Livingston, the web series has ambitions of getting on television some day. Written by Jean Sramek with Don Monaco credited as executive producer, "Old Lifty" is trying an all-local approach to the art of television.

The concept pilot premiered in May 2016 at the Zeitgeist Cinema on Superior Street in downtown Duluth.

I was able to see an advance copy of the short concept pilot for "Old Lifty." What follows is my brief review.

This episode runs less than 15 minutes and is really designed to sell the characters and concept more than a specific plot. In fact, you can see several potential episodes covered in passing, like a sort of sitcom training drill punctuated by one liners and sight gags.

The star of the show is its setting. Every plot element and transition crams the screen full of iconic, odd or eye-catching scenes from Duluth. The result is something refreshingly familiar to people from northern Minnesota, but also entirely new for someone used to shows filmed on sound stages in California.

The strength of "Old Lifty," at least based on the pilot, is its lead actress Cheryl Skafte. Her character, Karlene Anderson, is relatable and versatile, able to be the subject of jokes, or the deliverer of good lines. Karlene is kind of an early 21st Century everywoman, affected by a changing economy and both repelled by and attracted to the pull of home. Skafte plays her with whimsical range.

The rest of the cast shows promise, but the short pilot gives little room to develop the characters. We have Karlene's mom Bev (Ellie Martin), who runs a brewpub. One can see the seeds of a tough lady with a heart of gold, but in this episode she mostly shakes her head at a beer snob who can't stop talking about European brews. (Which is so hipster Duluth, unaware that serving beer in "flights" is itself beer snobbery of a high order).

The crew at the Duluth Port Authority provides some good laughs. Boss Frank (Dave Orman) has the makings of a interesting paranoid eccentric, but really only gets to yell at a guy who doesn't want him to lift the bridge and conduct an extremely odd job interview with Karlene. It seems like Frank has another gear that Orman could shift into if there were more time.

Fellow operators Chuck (Adam Sippola) and Norbert (Jonathon Manchester) are comic foils, but between them and boss Frank it seems like the whole crew could use more character definition. All I've got to go on is that Norbert is somewhat more funny-looking, and acts accordingly.

Scott (Luke Moravec) is Karlene's ex, who apparently still has the Bev's backing, setting up an awkward yet undeveloped scene between the two.

State Sen. Roger Reinert makes a cameo appearance as an angry motorist. He makes the most of his screen time.

"Old Lifty" is a sharp-looking, fun love letter to the city of Duluth and its way of life. I'll be looking to see if it develops into an exploration of unique northern Minnesota characters and Duluth-specific plot lines. It'll be a hard balance between being "local" and "too local."

Nevertheless it's tremendous fun seeing television become an accessible art form; something that can be produced and produced well -- even in the Zenith City of the Unsalted Seas, crown of the Old Northwest.