When half of downtown Grand Marais closes for the off-season, the North House Folk School campus continues to bustle with activity. Program Director Jessa Frost says their fall and winter offerings "give people who love the North Shore a reason to visit during the colder months. They can sit by a woodstove with a view of Lake Superior, craft with friends, and learn something new."

The Danes call this cozy feeling "hygge" (pronounced "hue-guh"). It might explain why studies have rated Denmark the happiest country on earth. Their wealth of warm fuzzies might also owe to another Danish invention: the folkehøjskoler, or folk school. 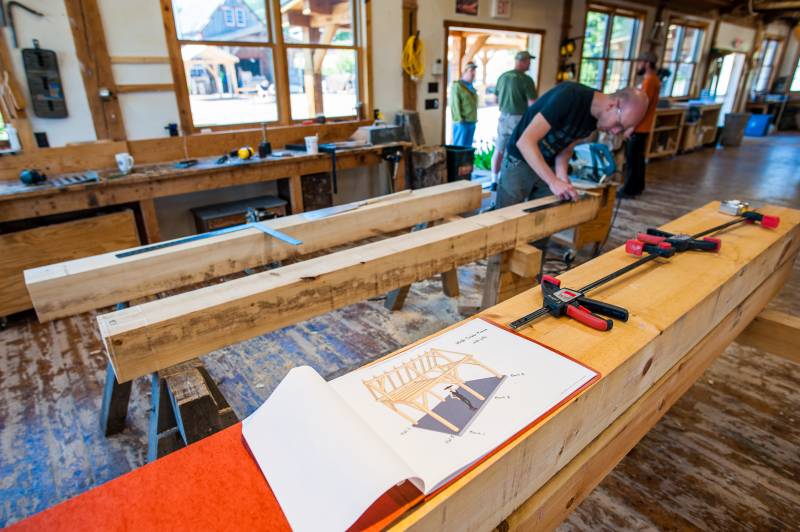 In the 1830s, Lutheran Bishop, writer, and philosopher Nickolai Fredrik Grundtvig founded the first folk schools to preserve traditional crafts and to provide higher education to the masses. Many Danes credit Grundtvig for creating their national identify and for founding their democracy.

The first folkehøjskoler in the U.S. was built in Tyler, Minnesota in 1888, and the structure now serves as Parish Hall for the Danebrod congregation.

Northern Minnesota's contemporary folk schools are nondenominational and invite people of all ages, backgrounds, and abilities to learn how to make beautiful and useful things from traditions around the globe - not just Scandinavia.

Founded in 1997, the North House in Grand Marais is devoted to "teaching traditional northern crafts," which, as Frost clarifies, "is any craft where winter affects what is available."

Meanwhile, the Duluth Folk School's new main campus in the burgeoning Craft District in Lincoln Park provides a variety of classes, affordable workspace to local artisans, and a venue for events. It also houses Dovetail Café that serves Almanac coffee and local brews on tap.

Even with different missions and structures, these three organizations share a love for tradition, community, and fun.

RESPECT FOR TRADITIONS AND NATURAL RESOURCES

North House's forgerylooks and sounds like the depths of Hades. Flames
flare from four ovens by hand-cranked blowers. Hammers pound sparks out of glowing rods on anvils. But this inferno has purpose: everyone has a job and the soothing voice of Marvin Gaye plays over the din.

Frost of North House says, "What makes us human is our ability to make things with our hands. Craft speaks directly to that... in the age of IKEA you can be disconnected from that process and it can be fundamentally unfulfilling."

Instructor and blacksmith Cody Myers of Superior, WI agrees: "Now tools are accessible and cheap. People want deals, not quality." He says he loves seeing the joy people get from practicing the ancient art of blacksmithing: "People don't understand it until they try it themselves." 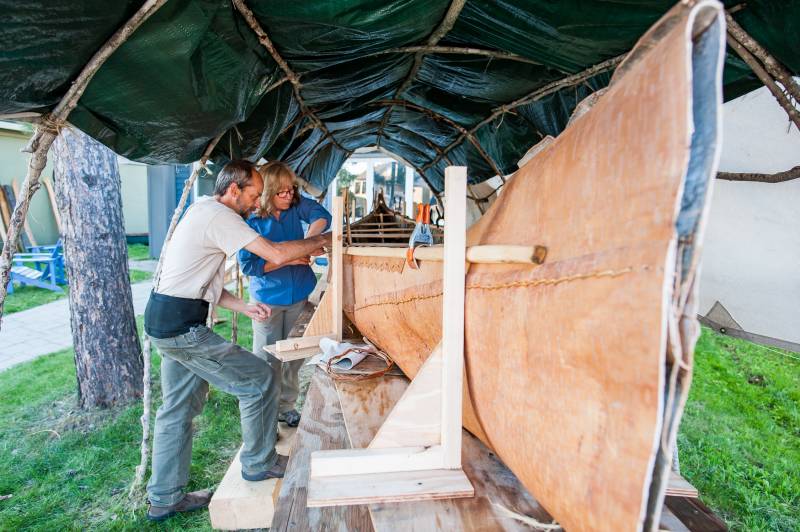 In their 2017 book, The Knowledge Illusion: Why We Never Think Alone, cognitive scientists Steven Sloman and Phillip Fernbach describe their Yale study that asked participants to rate how well they understood how everyday objects (like toilets and zippers) function. The participants thought they knew more than they actually did, a phenomenon Sloman and Fernbach call the "Illusion of Explanatory Depth." The most interesting part of the study was how participants reacted when they realized their ignorance: they became more open-minded and interested in their surroundings.

Basket making instructor Emily Dierke of central Minnesota starts her classes by teaching students how to responsibly harvest willow birchbark. Then they take the pieces back to North House and sort by size and purpose. Nine years ago, Dierke was a potter without a kiln. Then she realized she could make baskets from what grew nearby.

Canoe builder Erik Simula of the Ely Folk School also harvests his own materials. He often works with loggers to access birch, ash, and cedar from areas that are already being cleared. He instructs his building team to gently pull black spruce roots so they will grow back.

Simula learned to build birchbark canoes from an Ojibwe elder, and he has devoted his life to preserving this almost-lost Anishinabe tradition. He says that when he brings his six-person canoes to the White Earth Boys Fort Band on the Vermilion reservation and Lac LeCroix on the First Nations Reserve in Canada, the native community has responded in "awe, wonder, and embarrassment." He says their embarrassment comes from not knowing their own traditions. So much knowledge was lost after 1891 when the U.S. Congress required native children to attend boarding schools.

North House's Jessa Frost recognizes that non-native populations lose traditions, too: "The objects from our grandparents carry stories--like recipes... now what are we going to pass on to our kids?"

Mary Louise Icenhour teaches six of the Ely Folk School's regular volunteers how to make her family's potica (pronounced "po-teet-sa") bread. Her recipe came from her Slovenian grandparents who settled in Ely in 1890. It takes almost a day and many hands to make. Icenhour explains that there are a hundred different varieties of potica. For the filling, her Slovenian family used honey and walnuts, while Serbians further south prefer dates and poppy seeds.

As they roll out the dough to cover the 6 x 4 foot work table, a student asks,

Duluth Folk School's co-founder Bryan French says that even practical tasks, like fixing a latch or repairing a leaky faucet, are difficult for a lot of people nowadays. He says, "This might be simple stuff, but if you don't have the tools or the skills, what do you do?" To fill this gap, the folk school has created a tool lending library and a class called "Homeowner 101."

To read the full article of Making New Schools Old School and more great content in Lake Time Magazine, you can find it online HERE or consider supporting this independent publication by becoming a member and receive the latest issues PLUS great Lake + Co. Shop perks! https://www.thelakeandcoshop.com/collections/lake-time-magazine