Levi LaVallee is a snowmobile racer who holds the world record for snowmobile distance jump and is a seven-time gold medalist at the ESPN Winter X Games. He's known for his daredevil stunts in urban environments and for pushing the boundaries of what's been seen and done in the world of snow sports. He and his wife are strong supporters of St. Jude's Research Hospital and Wings for Life - Spinal Cord Research. 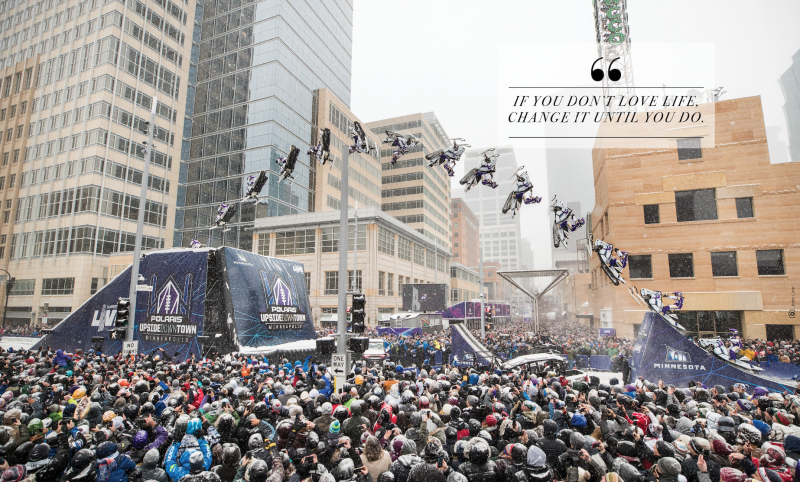 Who was your childhood idol?
Alongside my dad, it had to be motocross legends, Jeremy McGrath and Ricky Carmichael, and basketball hero, Michael Jordan. I still look up to those three, but in different ways now - I see how they have carried themselves post-racing and post-basketball and how they have grown as entrepreneurs.

I think there is a lack of people having heroes. And what I mean by that is, people don't have heroes to help influence them and hold themselves to a higher standard. When I saw my heroes growing up, I saw them doing incredible feats, becoming champions, winning races - and I just wanted to be that. It motivated me to push towards those types of goals. Growing up, I wasn't the fastest, the strongest, the wealthiest kid... but one of my favorite quotes from Zig Ziglar is, "You don't have to be great to start, but you have to start to be great."

Is there a piece of advice you've received that brought you to who you are and the meaningful work you do today?
Back when we were racing out of a small enclosed trailer and didn't have many sponsors or a factory ride, and the racers I was racing against had big million dollar haulers and had it all... my dad said, "It'll mean that much more when you beat the guy that has it all." And boy, he was right. My will to win was much greater than my want to win.

To learn more about Levi LaVallee and other inspiring change-makers in Lake Time Magazine, you can purchase or subscribe online HERE and support this independent publication. By becoming a member you would receive the latest issues PLUS great Lake + Co. Shop perks!