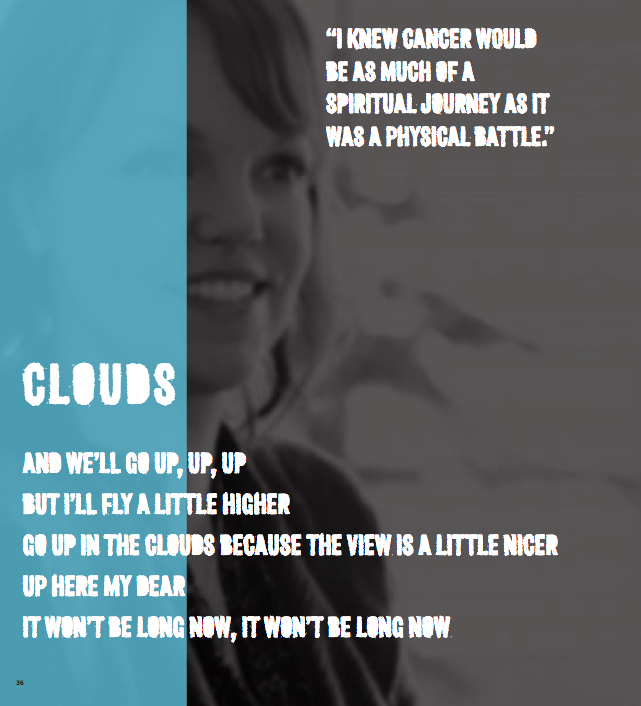 Tasha: I first learned about your son Zach after hearing his song 'Clouds' on a local radio station in 2012, like millions of other people. Can you explain to people who may not know Zach, or his story, how that song came to be?

Laura: Zach found out that he was terminal when he was 17 - around that same time I asked him to write letters to say goodbye to his family and friends because I knew there are things that needed to be said and it can be really difficult. I thought letters would be a good way for him to say what he really wanted to say. And then also for us to have something after he died to just sort of turn back to and hang onto. He really liked that idea; he understood what I was getting at. The letters never really happened but about a month later, I was sorting through some papers and I found a piece of paper with lyrics written on it... it said "Clouds" at the top and it was Zach's writing. As I was reading through these lyrics, I quickly understood that this was... this was how he was going to say goodbye. This was the medium that he was going to use. It turned out that he had already recorded it, too - he pulled out his phone and played it for me and that was the first time that I heard it. It was just such a heart-breaking song, yet it was a joyful song, too, and I just loved the song and what he was saying through it. It was then that I really understood and thought, "Oh he's processed this and he's okay." Between December 6th or 7th, the Minneapolis radio-thon happened and they played it on the air in the cities. By Christmas, the video jumped to 2 million hits and then it just kept going. Then everything else unfolded after that.

Tasha: The song "Clouds" moved and inspired millions of people in a very short period of time; achieving international success. Did you imagine "Clouds" resonating and touching so many people, as it has?

Laura: Yes, number one on iTunes and it hit billboard charts all over the country. It was such a gift. We couldn't have made it happen if we tried... all the right people came together at the right time. People were hearing with their hearts and saying "yes." And that's how our story has been. We all were in awe. And very aware that this song is beyond 'us.'

Tasha: You wrote a book, Fly a Little Higher, telling the story of how God used Zach's battle with cancer to touch and inspire the lives of millions. I'd imagine detailing (and re-visiting) those testaments were not easy.

Laura: There were times throughout our experience that I just knew I needed to write about this. So I did keep a journal, especially at the end. I never thought about a book... that was intimidating. But I knew I would lose those memories if I didn't write them down. I was really grateful that I had a project like this to jump into, because, for me, it would have felt almost like a betrayal to go back to life the way it was, like... picking up and going on. It's not a story about a kid who dies, it's a story about a kid that lives.

Tasha: Fly a Little Higher is such a thoughtful account of Zach and the human spirit. Can you share some insights that you have learned about the human spirit that maybe didn't exist (or were not fully recognized) for you before the book was complete?

Laura:With everything that happened around Zach... with the videos and the response to the song and all the outpouring of people around the world, I think I have a better understanding for humanity, because what I see is that we all hunger for the same thing... we are all desperate for hope and for love.

People's response was just amazing. That's a big part of our healing and mine personally because I am still so active in sharing our story and advocating for childhood cancer research.  That's very much a part of my life. But, I'm sensitive to the fact that we know other people - and that their children die and they don't get the kind of response that we've gotten, you know? I still hear from people every day who are just hearing Zach's story or revisiting it at a different point in their lives and are reaching out to tell me, "This really helped me through," and a lot of them don't know why. They say, "here's a story about a young person... dying. How and why can this bring HOPE?!" It's truly inexplicable, and beautiful.

Tasha: Do you attribute that to the divine?

Laura: Yeah, that's it. I know that we all have different ways that we approach our faith and life, but my goodness, our faith was what got us through because we could stand in a place. And I honestly think that happens to all of us in some degree, we just don't always get to see it. But we did. We saw it and I think that's the unique part, but also the hopeful part of our story, because I believe this happens to other families in its own form.

Tasha: You have mentioned that when you realized that you were going to lose Zach, that you had to put your hope into 'everything that came after.' Can you explain where you placed hope and how it kept re-defining itself?

In that shift, when you go through something like we did with Zach, hope is a lot of times something that's on this plain, like "I hope that this chemo works," "I hope that this radiation works," "I hope that the cancer goes away," "I hope for..." so it's kind of like you're just skipping ahead, like I hope for this now, I hope for this when all that stuff goes away. That's what you travel toward and so then there's nothing to pursue because it's - there's nothing left to treat. Then what? And I think we all go through that at some point in our lives... like, "I'm tapped out here, where do I place my hope now?" And so having that wrestling match and what that looks like for you... you have to focus on something else. And for me that was, "Okay, I don't have that next thing to jump to. Now it's God. Now God takes over this story and I have to trust in that." And what that looks like is actually... well, it's a wrestling match but then it's peace afterwards because then you're not the one controlling it anymore. Then the really cool stuff can happen because  you're open to it.

Tasha: I think humankind places some value on finding answers and placing hope in things that promise something more; it makes us feel productive and meaningful.

Laura: Yeah and I do think there's still a place for hope in something here. And for us, what that looks like is that we trusted God with this whole thing. Now my hope is that other kids will benefit from the legacy that Zach's left- which is raising money for this disease and for research to figure out something about this disease. That was really Zach's wish, too. He had a huge heart for other kids. We always thought, "we can do something to make this better and now we are."

Tasha: You prayed that if Zach must die, that you wanted it to be for something big that would change one person's life forever. Could you have imagined that Zach's story would impact millions of people?

Laura: Yeah, a month after we found out Zach was going to die and that wrestling match I was talking about. My prayer was very simply - and it's the by-line of my book - how God answered a mom's small prayer in a big way. I came to that place where I was like, "Okay... okay, you can have him but I want it to be for something big." And then in my imagination, I kind of spelled that out for God; this is, for me, what big is. And big for me was that I wanted Zach's life to impact one person and have that soul changed forever, like that's big - that is a big thing for somebody who might have the peace they need in their life; to have peace now because of Zach. People really responded to this is a kid that's dying and he's joyful and he's at peace and I want that.

Tasha: Was your family comfortable in talking about death and dying before Zach's diagnosis? Culturally, dying and death is a subject rarely openly discussed, yet it is a destiny that is certain. It can be a forbidding subject. When death involves a child, it feels particularly unjust.

Laura: We're by no means perfect and for that reason I've chosen to be pretty open about things and I think that's what's really allowed people to share in our story, but also feel some peace from it, too, so that they can see, "Oh they're just like us!" We never think it's us. And I think that's where our obsession about how we look comes from, too, just like aging is a bit taboo. You're not supposed to age - and you know, Zach just kind of flipped all that on its ear and was like, "this is actually a part of life, you know, and how are you going to do it?" So we definitely saw that side of it. People got really freaked out... especially for a kid dying... they said and did some really weird things that were just so inappropriate. We're all going to die and so it's how you do it. There's a big part of our world today that makes you think that you have to fight - tells us what fighting looks like and that you have to search the world for every possible treatment out there and that's where you're going to get your help and if you don't-- then you've failed. I always had a hard time with people that would say, "Keep fighting." I was like what does that mean? What does that really mean? And what does it look like to not fight anymore? You know - because that's a tricky thing.

Tasha: The present moment is sometimes referred to as "a gift," unwrapping authenticity and genuine living, in the moment. It is our "present" so to speak.

Laura: And it's the only reality that we have. It's certainly back to that question about how I live each day as though it's my last. I think people think that looks big and grand and what we have learned is that it's not. You don't have to be out there jumping out of planes; it's not a bucket list kind of thing. It's just very simply tapping into right now. That's how I live or I aspire to live every day like it's my last. 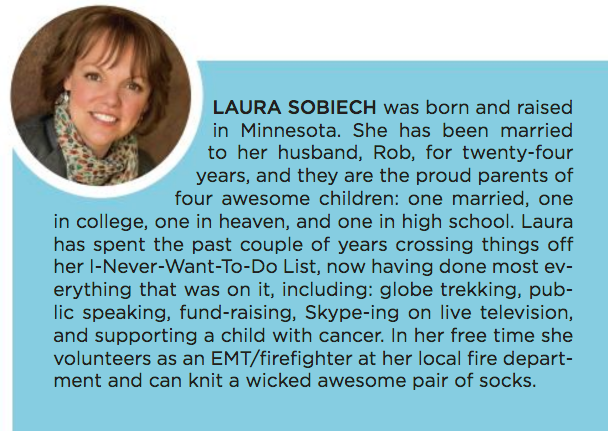 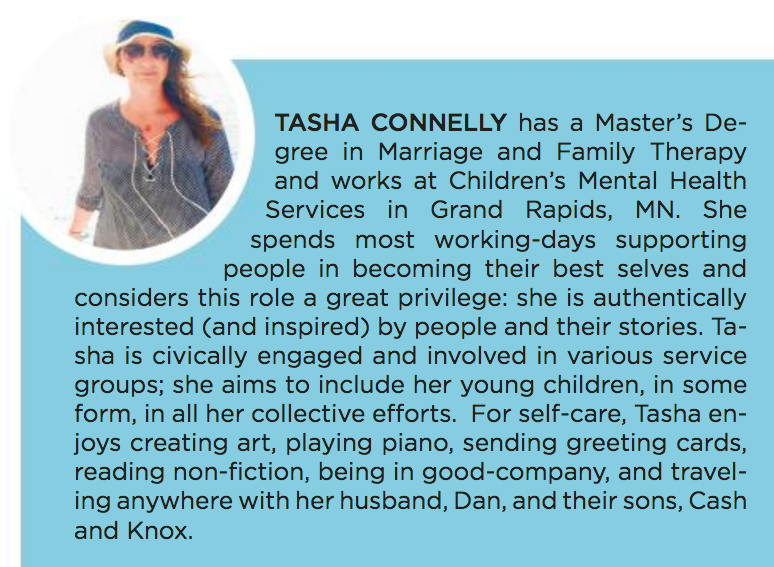