*A fissure eruption in Iceland, 2014. Around a billion years ago, a much larger fissure eruption stretched across the land that would become North America, oozing pools of lava and nearly splitting the early continent.

About 1.1 billion years ago, after millennia of straining and twisting as it migrated across the globe, the landmass that would become North America finally fractured. An enormous rift opened, a two-thousand-mile-long wound across the desolate plain at the continent's core. No grass or trees softened the barren, broken rock surface--multicellular life had not even evolved yet.

The earth shook; the rocky crust along the rift's edges crumbled and fell into the chasm. Once the rift had opened, plumes of molten rock spewed from the gash, arcing through the air in orange fans and splattering onto the rock. Curtains of smoke billowed into the sky. Erupted lava pooled and spread toward the horizons, slowly blackening as it crept to a halt, only to be overtaken by the next red-hot wave. The heart of North America was tearing apart, bleeding red lava, and its violent gushing continued for 24 million years. 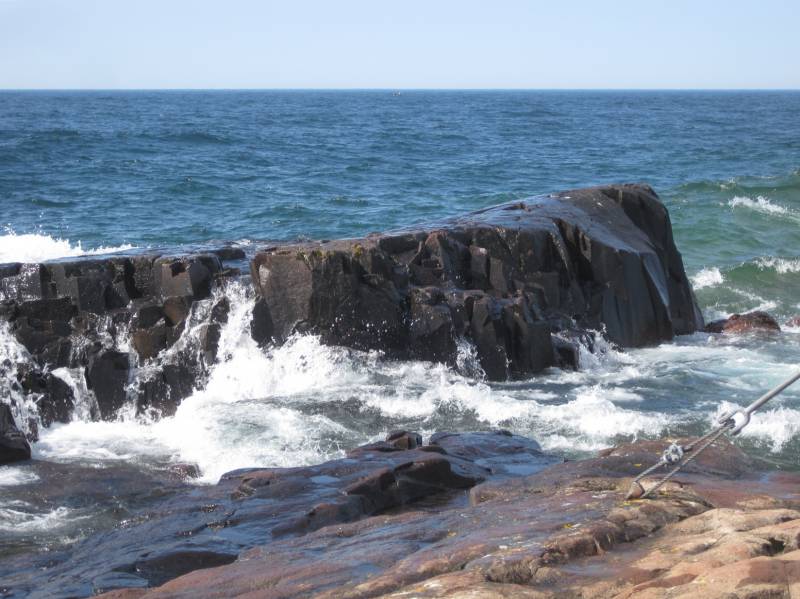 FOR GEOLOGISTS, A CLOSER LOOK AT THE EXPOSED VOLCANIC ROCK AROUND LAKE SUPERIOR, AND THE HIDDEN BELTS OF DENSE ROCK BENEATH, OPENS A WINDOW INTO THE PAST AND THE FUTURE.

Every August of my childhood my family piled into our big red van and drove up north to the scar of that ancient disaster--Lake Superior. My two brothers and I would burst from the van and run along the shore, clambering up and down the blocks of black rock between frosty green pines and cool blue water. When our bare feet were worn out on the hot rocks, we waded into the icy water of the lake until our toes went numb, usually after only a few minutes. The first one to retreat to the warm rocks lost.

The Ojibwe Indians who first settled Lake Superior's shores called the lake gichi-gami, or "Great Sea." It is the largest freshwater lake on Earth in terms of surface area. At its deepest, it reaches down 1,332 feet--deep enough to submerge the Empire State Building. To increase that depth by a single inch would take 551 billion gallons of water. In total, Superior holds three quadrillion gallons within its shores, enough to sustain the entire world's population on half a gallon of water per day for 2,300 years.

As a child I was adamant that Lake Superior really was superior to all the Great Lakes. But I really had no idea why Superior was so different, or that its roots stretched across the breadth of the
United States.

As it turns out, neither did scientists. In the 1950s and 60s, scientists mapping the magnetic and gravitational signature of North America noticed that the Lake Superior area sent unusually high signals compared to the rest of the country. The ancient lava that had burst from the prehistoric crack had solidified into rock that was high in iron and denser than the surrounding rocks, and though most of it was buried deep underground, it showed up loud and clear on their magnetic and gravity sensors.

"Geologists are taught to think that everything we see on the surface of the Earth is there for a reason," geologist Seth Stein said to me. "It's telling us something. It's a record of what the world is." For geologists, a closer look at the exposed volcanic rock around Lake Superior, and the hidden belts of dense rock beneath, opens a window into the past and the future.

Seth and Carol Stein are a husband-and-wife geologist team who decided to take a closer look. They, along with a crew of other geologists, founded a project called EarthScope, which focuses on better understanding the geology of North America. They knew that the strange pattern of rocks in the ground didn't appear out of nowhere--it tells a story.

In 2004, the National Science Foundation-funded program planted a swath of 400 seismic sensors along the West Coast. These seismic sensors show more than just magnetic strength or the pull of gravity, they create a 3D, underground image. The seismometers gather soundwaves from distant storms or earthquakes and record how they bounce through Earth's interior: slowly through loose, sedimentary rock, and quickly through hard, dense rock. It's like taking an ultrasound of the planet.

Field scientists bury seismic sensors a couple meters below the surface in a protective container, then wire them up to what looks like a cooler full of scientific equipment, and finally connect the whole apparatus to a solar panel for power. The sensors are silver cylinders designed to record vibrations in three directions. "There are three components because we live in a three-dimensional spatial universe," said geologist Michael Wysession in a talk for Public Radio International's Science Friday. "So there's up-down, left-right, and front-back." The sensors will detect earthquakes as far away as Asia or New Zealand--or tiny earthquakes from scientists jumping nearby--during their two years in the ground. By looking at how an earthquake signal hits seismometers across the array, scientists can decode where the signal originated and what rock it had traveled through to reach the sensors. By the time the seismometer's two years are up, scientists have a whole new picture of the ground beneath their feet.

In high school I took my first parent-free camping trip at Lake Superior with my friend Alison, who had never seen the lake. We started driving at four in the morning, and by the time we reached Duluth, the city at Lake Superior's eastern tip, the sun had risen and was glimmering brilliantly over Lake Superior's flat expanse of blue. I pulled over, turned off CD number three of the nine-hour playlist Alison had put together for our drive, and shook her awake for her first glimpse. I swept my arm out over the nodding yellow wildflowers and dark, haggard pines that framed the scene and urged her to admire "the ocean."

I knew it was a lake; I've always known it was a lake. But as I looked out at the vast expanse of water that stretched to the horizon, the ten-foot waves crashing against the breakers, the enormous cargo ships carrying taconite iron out to distant ports, my brain told me it was an ocean. Alison started calling it the ocean, too.

The continents are mostly made up of granite, a rock exposed in, for example, Yosemite Valley in California, Mount Rushmore in South Dakota, Acadia National Park in Maine, and kitchen counters across the country. It's flecked with different colors and relatively lightweight, as rock goes. Because they are so light, granite-based continents float in thick slabs on top of
Earth's magma.

Magma, or molten rock inside Earth, heats up close to the high-pressure core and rises toward the surface. When it rises, it cools, and so it sinks back to the bottom like the wax in a lava lamp. This circular motion shuffles the floating slabs on the surface in a process called plate tectonics. On a map of Earth, continents look like puzzle pieces that could fit together. In fact, every 400 or 500 million years, the continents crowd together in a supercontinent, then break apart again in new ways. This breaking up is called rifting. The most recent supercontinent was named Pangaea.

Then, 180 million years ago, plate tectonics pulled Pangaea apart again. The rift that would become the Atlantic Ocean cracked open, and lava that flowed out of the crack became a dark, dense, high-iron rock called basalt. The floating fragments of granite-like rock that made up the supercontinent drifted apart, and heavier basalt-like rock sagged low between them. "Rifting is like what happens if you pull a candy bar that has an outer chocolate shell and a nougat interior," explains Carol Stein in the video The Billion Year Story. "The chocolate layer breaks, and the inside stretches and bends downward." Eventually, the heavy basalt floor sank so low that ocean water flowed in above it, and the Atlantic Ocean
was born.

A little over a billion years ago, long before Pangaea, a mass of crust called Laurentia was cruising the globe when it, too, started to break apart. Laurentia would one day make up the central part of North America, but back then we would not have recognized its shape--the coastlines that give North America its distinctive silhouette had not yet been stuck onto the sides. Imagine the North America we know, but turned on its side, the equator running from Canada to Texas. Now imagine that Mexico and the continent's coastlines have dissolved away, leaving only the core of the continent--what geologists call the craton. A couple other cratons float nearby--land that will become Antarctica and Australia hovers above, land that will become Brazil scrapes by below. "Right about this time, what is now the Amazon Basin of South America--we called it at that point Amazonia--was sliding past the southern part of what is now the United States," Wysession said. The continents were rearranging themselves faster than they would at any other time in
Earth's history.

As Amazonia struggled to break away from Laurentia, straining the continent's interior, a "hot spot" of rising magma was centered right under the straining crust (a similar hot spot built the Hawaiian Islands). Under the added pressure, the rock finally gave way and lava poured out, solidifying into basalt.

To read the full article of Failed Rifts and Tectonic Shifts and more great content in Lake Time Magazine, you can find it online HERE or consider supporting this independent publication by becoming a member and receive the latest issues PLUS great Lake + Co. Shop perks! https://www.thelakeandcoshop.com/collections/lake-time-magazine