Creating A Culture of Caring

Do You Believe in Miracles?

A mother's perspective- By Lisa Kellin

Say hello to Marcus Kellin whose courage and never say die spirit is changing the face of Down syndrome... It started with his classmates and parents who created a culture of caring 20 some years ago. Today, this popular guy still continues to take the world by storm. With a college degree, a full-time job, and hundreds of athletic metals hanging on the wall, Marcus is putting form to acceptance and dismissing stigmas and opinions that people with disabilities are less capable. 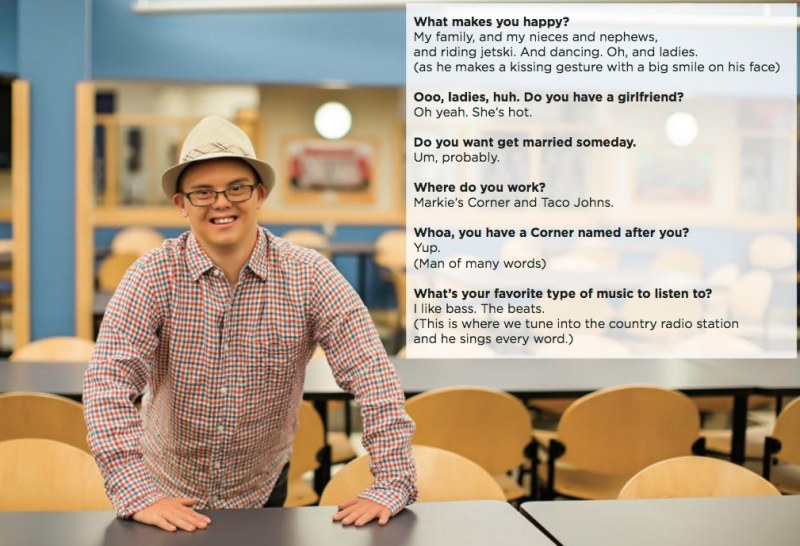 After an uneventful pregnancy my baby boy was born at Itasca Memorial. As he was my fourth child I knew something was wrong when he was not handed to me after delivery. "We believe your baby has Downs syndrome" the doctor said.  And so began our journey....

We received blue clothes, congratulations, cards of encouragement and sympathy condolences. My friend said I should have agreed to the amniocentesis test when offered and made the choice for an abortion (92% of Downs syndrome babies are aborted).

In his early years we had extended stays at Mpls Children's Hospital, a wonderful nurse friend for my babysitter, and enjoyed early childhood classes. He was excited to start school at Southwest and with the help of teachers, paras, and parents he made great friends.  He was invited to birthday parties, loved Paula's  Daycare, and participated in all the same sports and activities as his older siblings.

The middle school years came and the academic gap widened. He could not understand why he could no longer play hockey, baseball, soccer and football with his buddies. We stayed home a lot and watched T.V. He went through three DVD's of his favorite movie "Miracle" and cheered everytime the USA beat the Soviets in hockey. I wondered if it would be better for him to attend a school in the cities with kids "more like him," but his bond with his friends would not be broken. He started and excelled in Special Olympics.

Up to the High School... I prayed the students would be kind to him as he navigated the halls of Grand Rapids High. He drummed in the house band, loved his dodge ball class, went to prom and was excited to finally be a senior!

After an exciting week of sports and activities, the culmination of Homecoming was here. The Grand Rapids Band put on an amazing performance at halftime and the Thunderhawks defeated Duluth East in a nail biter football game. The Homecoming candidates were introduced with Karley Petersen being crowned the Queen and Marcus Kellin the King.

The current headlines are consumed with stories of teenage bullying. The headline reads different at Grand Rapids High School. The Class of 2012, underclassmen and staff at GRHS have done more than crown a friendly kid with Downs syndrome their Homecoming King, they have set a positive example and created a ripple of acceptance for all students. They have provided hope for other parents who, like myself 18 years ago, prayed that the world would be kind to my son.

The Homecoming King danced until midnight and slept until noon. Exhausted he decided to relax the next day with a movie. He popped in "Miracle" and cheered again when the USA defeated the Soviets and received the gold medal. At the end of the film when Al Michaels exclaims "Do you believe in Miracles?!" I chimed in with Marcus as he shouted back his usual response:  "OH YEAH!"

When Marcus graduated from high school, he had the option of staying in school until he was 21, like many kids with special needs. But he was determined to go to college like his friends and older siblings. So began the application process.  He and his parents began to investigate colleges, tech schools and programs to find a good 'fit' for Marcus. They discovered four programs in Minnesota, of which only two would be appropriate for his abilities.  Fortunately Central Lakes College in Brainerd offered an Occupational Skills program which combined entry level college courses with a job internship. Marcus applied and jumped for joy when his acceptance letter arrived in the mail. Soon, he was off to college, living with roommates and would achieve his goal of graduating and earning a diploma.

Marcus brought his resume to a resort,  interviewed  and landed the job.  He drove his souped-up golf cart to and from work that summer and has been gainfully employed ever since.

THE WORLD IS A KINDER PLACE

Being crowned Homecoming King has been one of the highlights of Marcus' life.  But, this honor did not just happen randomly.  It began in Kindergarten when children who were raised by compassionate parents invited Marcus to birthday parties, sleepovers and sporting events. He was treated as a friend. Extraordinary teachers made the extra effort to include him. Things like his Phy-Ed  teacher surprising him when his entire dodge ball class showed up wearing "End the R Word" t-shirts. It was amazing! They were supporting the Special Olympics campaign to end the derogatory slur "retard" from everyday speech. And boy, did they.

Another example is the Grand Rapids High School football coach hosting "Victory Day" on Homecoming weekend, where the football team practiced drills and touchdowns with kids with disabilities while the cheerleaders cheered and the pep band played the school rouser. These little things mean the world.

YOU CAN DO IT TOO

Our society has come a long way since Marcus was born 22 years ago, yet there is still a long ways to go.  It would be amazing to see students with disabilities have the opportunity to receive an education or training for meaningful work. Purpose. We all need it. We can all provide it.

MARCUS CONTINUES TO LEAVE HIS MARK...

the lasting impression on how his classmates view and relate to people with disabilities.  The hope would be that these characteristics of acceptance and understanding are passed down to their children and that they too will make sure to invite the kid with disabilities to their birthday party. Or as they start their careers, they will continue to be kind and encouraging to the worker with disabilities.  And if they become employers they will interview and hire the applicant with the resume that indicates he or she has disabilities. That is the world we want to live in.

YOU NEVER KNOW WHO'S WATCHING

At Marcus' graduation celebration it was decided to start an annual scholarship for a senior(s) who exhibited unusual kindness. There is no application or GPA review, just a couple of teachers quietly observing students who are exceptionally caring. Each year's recipients continue to impress and humble us with their exceptional compassion and kindness.  Be kind. 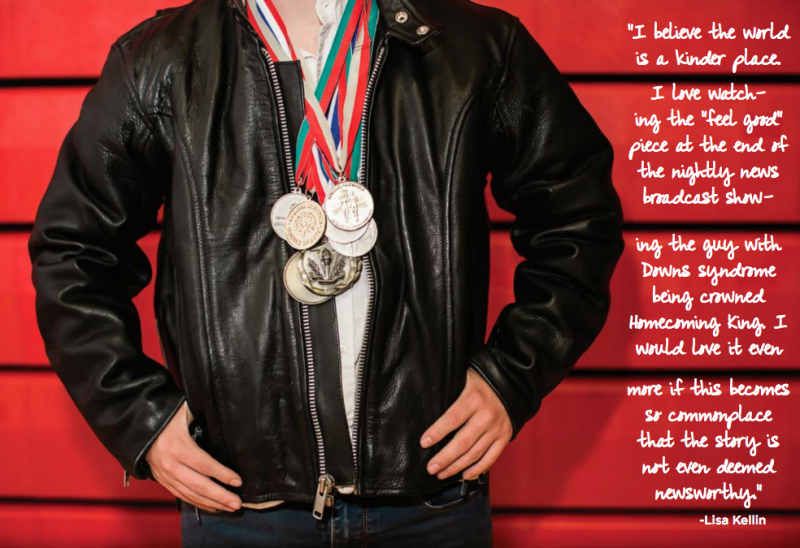