In Minneapolis, City by Nature, you'll find everything you'd expect in a large city. Theatres, hotels, shops, restaurants, internationally known art museums. And don't forget the skyscrapers. But a concrete jungle it is not. Other major cities can have all that. Minneapolis will keep its waterfalls, chain of lakes, too numerous to count parks (even though it has--there are 197), and more bike trails than you can tackle in a day on two wheels.

ix blocks. That's the longest distance any Minneapolis resident has to walk to get to one of the city's parks. When you get to one, take in the scene and take part in the action. It's common to see pick-up soccer games break out, Frisbees whizzing around, bikers and joggers flowing by, and people simply relaxing. Often as soon as the temps hit 50 for the first time in the spring. Hailed five years running as the best park system in the nation by Park Score (2013, 2014, 2015, 2016, and 2017) you can't visit the City by Nature and miss spending time in one of the acclaimed parks that beat out New York City and San Francisco year after year.

Consistently ranked as one of the top bike cities in the country, Minneapolis boasts a 200 plus mile system of bike trails and paths throughout the city. Rain, snow, or shine, this city is adamant about its biking (they even plow the bikeways in winter). With the country's first bike share program, Nice Ride Minnesota, since 2010, Minneapolis leads the way and makes it easy for everyone to get around with pedal power.

Want a few suggestions of ways to get outdoors and try some of the activities that keep residents the most fit in the nation (Minneapolis is the #1 fittest city in the nation according to the 2017 ACSM American Fitness Index®)? We thought so.

Walk across this iconic Minneapolis bridge that overlooks the only natural falls on the Mississippi River, St. Anthony Falls, then check out the nooks and crannies of the former milling capital of the world from the 1880s to the 1930s in a park where you'll see the inner workings of the river system that powered the world's largest flour mill.

2. Cruise down the Mississippi River aboard the Minneapolis Queen paddle wheeler

Want the outdoors experience without the work? Sit on deck and relax on this cruise down the Mississippi River as you learn all about the rich history of Minneapolis while taking in skyline views with eagles overhead and enjoying the sound of the water lapping against the boat.

3. Take a Nice Ride bike tour of one or several sections of the Grand Rounds National Scenic Byway

Explore Minneapolis on two wheels. Travel like a local and rent a Nice Ride bike to take a ride by the river. Or the greenway. Or the lakes. The 52-mile byway consists of a linked series of parks and weaves through seven segments of the city. From the downtown riverfront, to the Chain of Lakes, Theodore Wirth Park to Victory Memorial and Northeast, you're bound to pass by more than just bodies of water. The loop encompasses woodlands, riverbanks, wetlands, lagoons, gardens, and parkways.

4. Get active where Mary did: Lake of
the Isles

Runners, bikers, skaters, picnickers, readers, snoozers. You'll find them all at Lake of the Isles, where fictional 1970s heroine Mary Tyler Moore's Mary Richards lived and strolled. Take your own walk, join the paddlers, or bring a few snacks and pop a seat under a tree to experience some of the best people watching in Minneapolis.

5. Watch a movie at the Lake Harriet Bandshell

Sometimes it's just nice to sit and enjoy the great outdoors, too. After an active day, catch a flick with hundreds of your new best friends in this city of lakes. From Disney originals to old classics and even some Harry Potter, the Lake Harriet Bandshell, among many other Minneapolis Parks locations, hosts their Music and Movies in the Park series throughout the summer months. Bring a blanket, cozy up, and catch your favorite flicks with a snack from Bread & Pickle.

6. Take a Magical History Tour of the
Mill City

Learn about the natural and civic history of the Minneapolis riverfront while cruising along on a Segway. This is one of the most unique ways to see the city, and this tour is incredibly popular. Because it's incredibly fun. And there are snacks. You'll get a three-hour tour, training, and even a pass to the museum for later.

Did you know waterskiing was invented in Minneapolis? It's true. Grab the best IPA in town and watch the River Rats take over the riverfront from Pryes Brewery! Watch water skiing acts and skits and listen to music as the River Rats entrance you with their feats on the flowing Mississippi.

8. Have some wheel fun

Minnehaha Falls Regional Park and Lake Calhoun/Bde Maka Ska are just a couple spots where Wheel Fun Rentals provides pedal boats, kayaks, stand-up paddleboards, canoes, and surrey bikes to rent so you can get your workout and see the scene without missing a beat.

9. Get on the freeway

You'll want to spend time on this one - a bike freeway, built along a 5.5-mile long former railroad corridor in south Minneapolis, the Midtown Greenway's three lanes - two for biking and one for runners - are well maintained, lit at night, and open 24/7. For most of its distance, the paths are separated from streets, making for a safe and barrier-free ride at all times. Along the west, the Greenway connects with the Minneapolis Chain of Lakes and the Southwest LRT Trail, while along the east it adjoins with trails along the Mississippi River.

10. Recite the Song of Hiawatha where Longfellow was inspired to write it

Popular Minnehaha Regional Park is best known for its modest, yet highly photogenic 53-foot falls. While the falls attract most visitors, they stay and return time and again for the numerous playgrounds, picnic areas, and trails, some of which follow right down to the creek where people sunbathe and fish. The notably long lines at Sea Salt Eatery (open seasonally) are an indication of its flair with fast-casual seafood and the appeal of its inviting patio.

There are plenty of other great spots to get outdoors, be active, and take in the green, lush City by Nature. For more ideas and trip planning help, check out minneapolis.org. 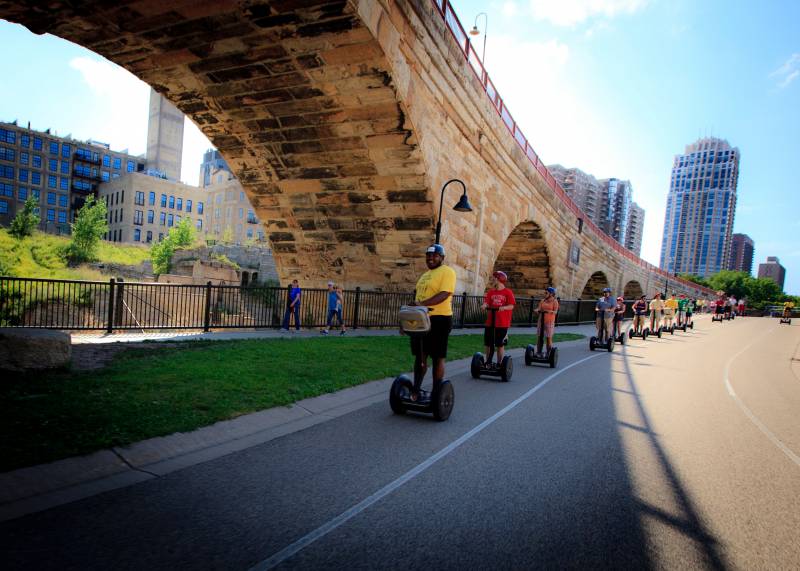