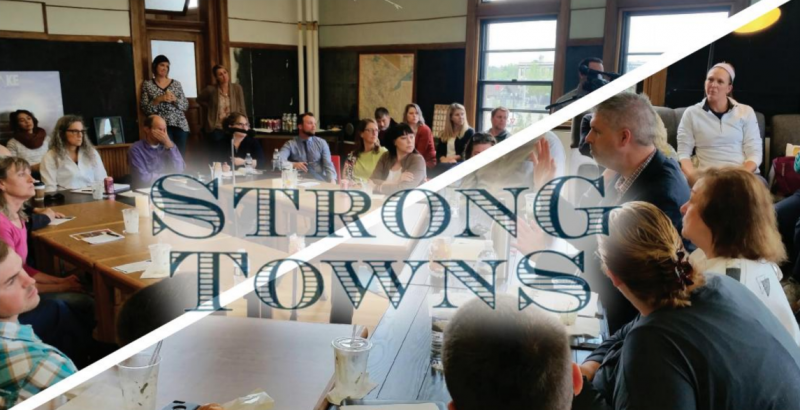 We often forget that the American pattern of suburban development is an experiment, one that has never been tried anywhere before. We assume it is the natural order because it is what we see all around us. But our own history -- let alone a tour of other parts of the world -- reveals a different reality. Across cultures, over thousands of years, people have traditionally built places scaled to the individual. It is only the last two generations that we have scaled places to the automobile.

How is our experiment working?

At Strong Towns, the nonprofit, nonpartisan organization I cofounded in 2009, we are most interested in understanding the intersection between local finance and land use. How does the design of our places impact their financial success or failure?

What we have found--through research and in town after town across America where we've hosted presentations--is that the underlying financing mechanisms of the suburban era -- our post-World War II pattern of development -- operates like a classic Ponzi scheme, with ever-increasing rates of growth necessary to sustain long-term liabilities.

Since the end of World War II, our cities and towns have experienced growth using three primary mechanisms:

where the federal or state government makes a direct investment in growth at the local level, such as funding a water or sewer system expansion.

where transportation infrastructure is used to improve access to a site that can then be developed.

where cities, developers, companies, and individuals take on debt as part of the development process, whether during construction or through the assumption of a mortgage.

In each of these mechanisms, the local unit of government benefits from the enhanced revenues associated with new growth. But it also typically assumes the long-term liability for maintaining the new infrastructure. This exchange -- a near-term cash advantage for a long-term financial obligation -- is one element of a Ponzi scheme.

The other is the realization that the revenue collected does not come near to covering the costs of maintaining the infrastructure. In America, we have a ticking time bomb of unfunded liability for infrastructure maintenance. The American Society of Civil Engineers (ASCE) estimates the cost at $5 trillion -- but that's just for major  infrastructure, not the minor streets, curbs, walks, and pipes that serve our homes.

The reason we have this gap is because the public yield from the suburban development pattern -- the amount of tax revenue obtained per increment of liability assumed -- is ridiculously low. Over a life cycle, a city frequently receives just a dime or two of revenue for each dollar of liability. The engineering profession will argue, as ASCE does, that we're simply not making the investments necessary to maintain this infrastructure. This is nonsense. We've simply built in a way that is not financially productive. We've done this because, as with any Ponzi scheme, new growth provides the illusion of prosperity. In the near term, revenue grows, while the corresponding maintenance obligations -- which are not counted on the public balance sheet -- are a generation away.

In the late 1970s and early 1980s, we completed one life cycle of the suburban experiment, and at the same time, growth in America slowed. There were many reasons involved, but one significant factor was that our suburban cities were now starting to experience cash outflows for infrastructure maintenance. We'd reached the "long term," and the end of easy money.

It took us a while to work through what to do, but we ultimately decided to go "all in" using leverage. In the second life cycle of the suburban experiment, we financed new growth by borrowing staggering sums of money, both in the public and private sectors. By the time we crossed into the third life cycle and flamed out in the foreclosure crisis, our financing mechanisms had, out of necessity, become exotic, even predatory. One of humanity's greatest strengths -- our ability to innovate solutions to complex problems -- can be a detriment when we misdiagnose the problem. Our problem was not, and is not, a lack of growth. Our problem is 60 years of unproductive growth -- growth that has buried us in financial liabilities. The American pattern of development does not create real wealth. It creates the illusion of wealth. Today we are in the process of seeing that illusion destroyed, and with it the prosperity we have come to take for granted. That is now our greatest immediate challenge. We've actually embedded this experiment of suburbanization into our collective psyche as the "American dream," a non-negotiable way of life that must be maintained at all costs. What will we throw away trying to sustain the unsustainable? How much of our dwindling wealth will be poured into propping up this experiment gone awry?

We need to end our investments in the suburban pattern of development, along with the multitude of direct and indirect subsidies that make it all possible. Further, we need to intentionally return to our traditional pattern of development, one based on creating neighborhoods of value, scaled to actual people. When we do this, we will inevitably rediscover our traditional values of prudence and thrift as well as the value of community and place.

The way we achieve real, enduring prosperity is by building an America full of strong towns. That's what we work for at our organization. We spread our message of incremental growth, financial solvency and bottom up action to help strong citizens make their towns and cities better, more productive places to live.

Strong Towns is a national media organization whose mission is to advocate for a model of development that allows America's cities, towns and neighborhoods to grow financially strong and resilient.

For the United States to be a prosperous country, it must have strong cities, towns and neighborhoods. Enduring prosperity for our communities cannot be artificially created from the outside but must be built from within, incrementally over time. A Strong Towns approach relies on incremental investments instead of large, transformative projects, emphasizes resiliency of result over efficiency of execution, and is inspired by bottom-up action, not top-down systems.

Strong Towns produces award-winning daily articles and podcasts, as well as events across the country. Strong Towns has members throughout the world.

Cranberries: It's A Family Affair

IGNITING OPPORTUNITIES For People with Disabilities

From Traffic To Tranquility