FROM THE BENCH TO THE FIELD.. Teaching a youngster to shoot 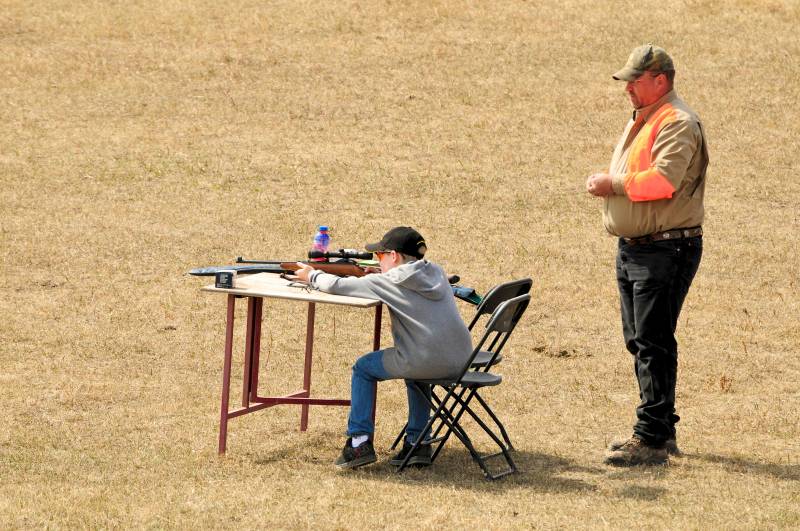 Even as a youngster I could always tell when the whitetail season was getting close. My dad would spend more time at the gun range and there was always a variety of new hunting gear lying around the house. He would spend hours in his favorite hunting locations scouting and putting up treestands and ground blinds in preparation for the approaching whitetail season. I wasn't old enough to hunt or even strong enough to hold a rifle but I couldn't wait for the day when I was a "big boy" and could go whitetail hunting with dad. Even at a young age, I knew being asked to go hunting with dad would be like a rite of passage into manhood.

Every parent or guardian that has a passion for hunting dreams of the day when he/she can take their son, daughter, grandchild, or any youngster that is close to them hunting. The entire experience is new to the youngster and as an adult outdoor enthusiast, it's our responsibility to pass the tradition of hunting, fishing, and conservation, onto the next generation. And one of the most important traditions and lessons we can pass onto a youngster or a new hunter of any age, is how to shoot and handle a rifle safely and the responsibility of making a clean and humane shot on the animals we hunt.

Growing up on the family farm I spent hours walking the fields with a .22 shooting ground squirrels. I spent many afternoons nuzzled behind a .22 with a ground squirrel in my sights. At the time I didn't realize it but that is where I took my apprenticeship in shooting and gun safety. My dad's rule was one bullet in the magazine at a time with the safety on and the muzzle pointed to the ground until I was ready to shoot. I can still remember the stern tone in his voice and it was clear that the rules I was learning were not to be taken lightly. I got to be pretty good at plunking ground squirrels and I know the time I spent in the field at a young age with my dad and that old .22 is the biggest contributor to my hunting success to this day. However, not all of us have a family farm and a field full of ground squirrels at our trigger finger.

Today, many avid hunters live in the city and have busy schedules and it's much harder for parents or guardians to not only teach a youngster to shoot and the safety that goes with it, it's getting harder to find the time and a place to go shooting. However, the importance of passing on hunting and safe gun handling remains the same.

The first time a youngster gets to see a big heavy adult hunting rifle he or she may be intimidated or even a little scared at its very presence. That intimidation is a good thing and will turn to respect as the youngster gets more comfortable being around and handling a rifle. This is where an adult conversation with no distractions needs to take place between you - the responsible gun owner - and your student.

The power and damage a gun, crossbow, or archery equipment can do and the consequences if mishandled must be firmly instilled into the youngster or any gun owner for that matter. They need to understand that handling a real gun with live ammo isn't like their video games where after the gunfight is over their friends will go home. This conversation and respect needs to be imbedded before a youngster ever picks up a rifle and the truth is, as anxious as we are to go shooting with our son or daughter, it's up to us - the adult and responsible gun owner - to make the call if the child is truly ready or mature enough to handle a hunting rifle. Any responsible adult that hunts with a rifle, crossbow, or archery equipment has this respect and understanding of the damage high-powered hunting equipment can do if it isn't treated with respect and handled safely. This is the first and most important gun safety act you can teach a youngster and again, it needs to be imbedded and understood before they ever pick up a rifle.

It's not uncommon for hunting rifles that are too big or too heavy for the youngster or new shooter to cause bad habits. As experienced shooters we know that bad habits affect our downrange accuracy. However, a youngster often believes you just point and shoot. After all, that's what they see the adult do. But until the youngster or new shooter's shooting confidence grows they have a hundred things to remember and to focus on. It's not uncommon for a youngster to dream of the day he/she gets to go shooting or hunting with their parent or guardian and because of this anticipation they will often put a great deal of pressure on themselves. Depending on the child, if they're not seeing results in their accuracy, it can have a negative effect on their confidence and shooting experience.

To quickly build their confidence and keep their experience positive, I personally like to start all new shooters, regardless of age, shooting from a bench with a rifle rest and the basic fundamentals and mechanics of shooting using a paper target from only 25 yards away. As the shooter's confidence and accuracy grows you can start moving the target farther away and shooting from longer distances. However, don't make the new distance too dramatic. Moving a new shooter distances too far too fast may negatively affect the confidence you have previously built in them. Proven strategies in building shooting confidence - especially in young shooters - is 25 yard increments. For example 25, 50, 75, and 100 yards, building the shooter's confidence as you increase the distance between the shooter and the target.

With the advancements in hunting rifles there has never been a time in history when it's been easier to learn how to safely and confidently shoot a hunting rifle or a bow for that matter. Walk into any sporting store that carries hunting rifles or archery equipment and you will find a wide variety of youth rifles in an assortment of calibers including shotguns and bows. Rifle and archery manufacturers have made it easier to teach our youth to safely shoot a hunting rifle or a compound bow by manufacturing smaller and lighter youth rifles and bows.

With a youth hunting rifle, a youngster doesn't have to face many of the trials and errors that are often caused by shooting with a rifle that is too large and often too heavy for a young shooter. At the time I didn't realize it but the lightweight .22 rifle that I spent hours shooting ground squirrels with imitated today's modern youth hunting rifles. It was shorter than a standard hunting rifle and much

lighter, allowing me to handle it safely and shoot accurately after I had the basics.

Taking your son or daughter to your favorite gun store and getting them set up with a youth hunting rifle will be money well spent. A youth rifle will allow the youngster to gain the confidence and accuracy needed to excel their hunting and shooting careers. And once they outgrow the rifle it can be sold or kept until your son or daughter is ready to pass your teaching on to their own children.

RESPECT FOR THE ANIMALS WE HUNT

Introducing a youngster to the outdoors and shooting sports is one of the most important things we can pass on to our youth. Equally important is teaching them to show respect for the animals we hunt. It doesn't matter if we are hunting ground squirrels or a trophy whitetail buck, teaching a new hunter the importance of making a clean and humane shot should never be overlooked.

A good friend of mine's son came of legal hunting age only a month before the whitetail season opened. He had purchased his son a youth .308. They spent hours at the range and my friend told me his son was groping three inches at 100 yards off the bench. However, on the fourth day of the whitetail season they spotted a nice buck walking directly at them. They both laid on the ground and made a rest out of a backpack and waited for the buck to close the distance. My friend said he could see his son was a little uneasy but thought it was just the excitement of the buck moving closer. The buck was facing them straight on when he stopped only 65 yards away. The boy couldn't find the buck in his scope and began to fidget in hopes of finding him through the scope.

When he did find the buck all he could see was hair. By the time they made the magnification adjustments, the buck had moved and didn't offer a clear shot at his vitals. The father called off the shot. All they could do was watch the buck move out of range and out of the area.

My friend said the biggest mistake he made was not practicing real life shooting conditions. Because the father and son team had spent hours shooting from a bench in a sitting position, the boy had never experienced real shooting conditions during a hunt. As anxious as my friend was for his son to shoot his first whitetail buck, with no vitals showing it was less than an ideal shot for a first time hunter. He didn't want to run the risk of wounding an animal and having his son's first kill be a negative experience. After the buck was out of sight the boy's disappointment showed through. To make matters worse, the boy thought his dad would be upset. My friend sat his son down and explained to him that he wasn't upset and about the importance of the idea that if there is no clear kill shot, there is no shot at all.

Once a youngster or new hunter has the confidence to shoot from a bench, it's important for all of us - including veteran hunters - to practice from a variety of real life shooting positions. A shooting instructor once told me. "I've killed a lot of deer, but never from a bench."

THEY DON'T ALL HAVE TO BE TROPHIES

If the youth in your life is coming of hunting age, now is the time to get them shooting. Get them set up with a youth hunting rifle and take the time to teach them respect, build their confidence, respect the animals they hunt, and be patient. Your teachings will grow a hunting partner for the rest of your life.